HomeUnstoppable!Unstoppable: How Laine Richards Has Been Able To Thrive and Succeed Despite...
Unstoppable!

Unstoppable: How Laine Richards Has Been Able To Thrive and Succeed Despite Being Challenged With Epilepsy 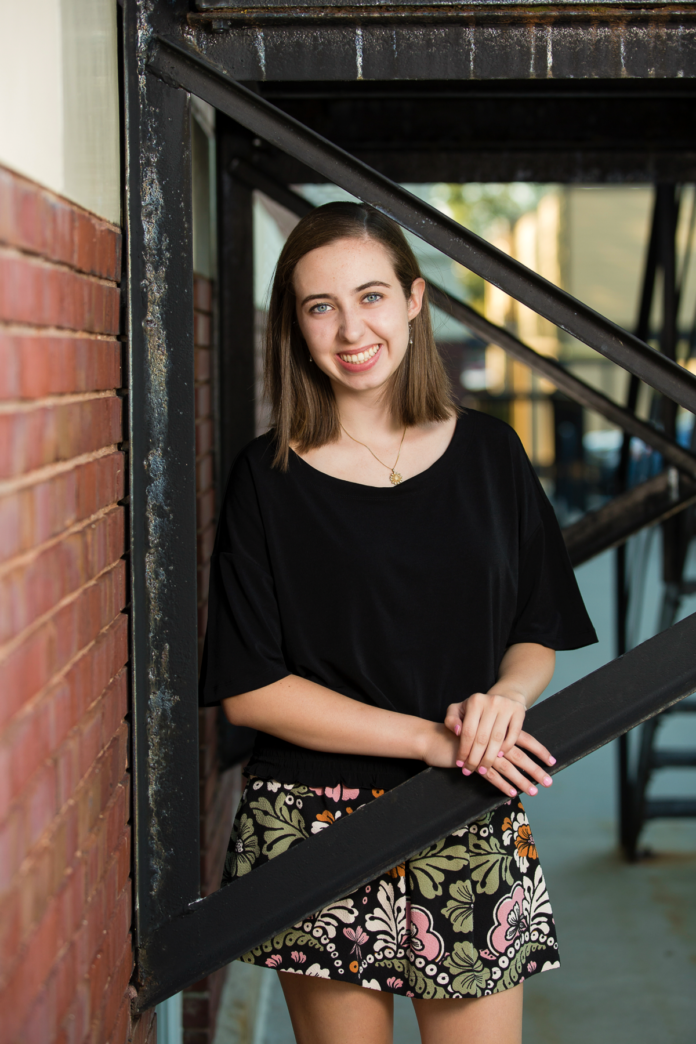 You know someone with epilepsy. Sadly, epilepsy is still stigmatized so many don’t talk about it. More people live with epilepsy than Parkinson’s disease, multiple sclerosis and cerebral palsy combined and 1 in 26 people will develop epilepsy in their lives. It impacts more than 3.5 million Americans.

As a part of our “Unstoppable” series, I had the pleasure of interviewing Laine Richards.

Despite living with daily seizures, Laine Richards has been an influential advocate for the Epilepsy Foundation of Michigan, personally raising more than $165,000 since she became involved with the organization. Laine is very active with the Foundation and has also represented the state of Michigan in the Epilepsy Foundation of America’s “Teens Speak Up” program where she has lobbied on Capitol Hill annually to advocate for those living with epilepsy. Additionally, Laine is a proud recipient of a 2020 UCB Family Epilepsy Leader Scholarship. She also was the driving force behind the 2019 East Grand Rapid’s Hearts of Gold campaign, a community-based group of students and parents who work every year to raise funds and awareness for a non-profit organization. In 2019, Laine helped raise almost $220,000 with Hearts of Gold for the Epilepsy Foundation of Michigan. Laine attends Grand Valley State University and is majoring in special education.

Than you for joining us! Our readers would love to get to know you a bit better. Can you share your “backstory” with us?

Although I was born in Laguna Beach, CA, I am a proud “Michigander” through and through. When I was in first grade, my family and I moved from California to the Detroit area, and later I moved to East Grand Rapids with my mom, stepdad and younger brother until I left for college a few months ago.

We affectionately call East Grand Rapids “the bubble.” It really was a special place to grow up and has an extraordinary sense of community along with excellent schools. These factors very much came into play when I was diagnosed with epilepsy because the support I received in East Grand Rapids was life changing.

Starting from when I was in the sixth grade, epilepsy became a large focus of my life. When I was first diagnosed in 2013, we thought that I had a childhood version of epilepsy that I would outgrow. Unfortunately, in 2015, when I had my first grand mal seizure, we realized that I had a mix of juvenile myoclonic epilepsy (JME) and juvenile absence epilepsy (JAE) — both lifelong conditions with no cure.

Like one million other Americans, or 30% of all people with epilepsy, I suffer from drug-resistant (or intractable) epilepsy. Despite taking high doses of anti-seizure medications to control my seizures, I still have daily absence and myoclonic seizures and occasional generalized tonic clonic seizures (commonly known as grand mals).

I went through several years of drug changes and dealing with the sometimes debilitating side effects of the anti-seizure drugs. There were trips to the ER, week long stays at the hospital, doctor visits in Chicago, Detroit and Grand Rapids, weeks of missed school and more.

Despite all of these challenges, I grew and thrived. I found my passion and decided in middle school that I would be a special education teacher, which is my declared major now at Grand Valley State University. I lobbied multiple times on Capitol Hill in Washington, D.C. for epilepsy support, skied Big Sky in Montana, rode roller coasters at Universal in Orlando, swam in the surf in Waikiki, rowed crew on the Ohio river, and gave speeches in front of thousands of people. I decided a long time ago that I absolutely wouldn’t be a victim of my circumstances.

Do you feel comfortable sharing with us the story surrounding how you became disabled or ill? What mental shift did you make to not let that “stop you”?

I always felt that I wasn’t like most other kids. In retrospect, I think I started having seizures when I was in kindergarten. Like many people with epilepsy, I wasn’t formally diagnosed for many years (until 2013) and that was after a year of a misdiagnosis. It’s hard to comprehend that a doctor (and three psychologists and an occupational therapist, in my case) could all miss a child having multiple seizures an hour, but it happens every day. Most people don’t realize there are more than 40 types of seizures — many of which don’t look like seizures.

When I was first diagnosed, I didn’t want anyone to know. I was embarrassed and I didn’t fully understand what was happening to me. I was terribly sick from the drugs and had missed about 30 days of school that year, as well.

What changed everything was going to my first epilepsy camp in 2016 (Camp Discovery) hosted by the Epilepsy Foundation of Michigan. It was the first time my mother forced me to do something I truly didn’t want to do, but it was the best thing that ever happened to me. I walked into the camp a terrified, self-conscious kid and walked out an epilepsy advocate on a mission. And I never looked back.

Can you tell our readers about the accomplishments you have been able to make despite your disability or illness?

We raised a record-shattering $219,000 for the Epilepsy Foundation of Michigan! As part of the campaign, we raised significant epilepsy awareness in West Michigan. Neurologists spoke at my high school, we had booths at fall festivals, we distributed educational materials and spoke at all five of our schools. More than 3,000 students were involved.

The most incredible moment for me was when a classmate approached me after one of the presentations at my high school and told me after listening to the doctors, he thought he was having seizures. He was diagnosed with epilepsy two weeks later.

The Epilepsy Foundation of Michigan opened so many doors for me. I’ve been so lucky to lobby on Capitol Hill in Washington, D.C. as part of “Teens Speak Up” and am now on a first name basis with my Michigan Senators. I’ve done dozens of media interviews to raise epilepsy awareness and have given several speeches, some in front of hundreds of people.

I also am so proud to be a recipient of a 2020 UCB Family Epilepsy Leader Scholarship. It was incredible affirmation of the years of advocacy and trying to make a difference in the epilepsy community.

Now, I’m living my dream to become a special education teacher. I’m attending Grand Valley State University and living on campus. My advocacy isn’t over either, I plan to start an epilepsy support group on my campus and am working with the Foundation to provide seizure rescue training to campus police. There’s still so much work to be done.

What advice would you give to other people who have disabilities or limitations?

Earlier, I said that I felt I wasn’t like the other kids. I was right. Because of my disability, I am stronger, more resilient, more mature, more compassionate. I appreciate life. I am thankful. I can talk to anyone from a U.S. Senator to a neurologist. I can advocate for myself. And as crazy as this sounds, I am grateful that I have epilepsy. It’s made me who I am, and I wouldn’t change a thing.

None of us are able to achieve success without some help along the way. Is there a particular person who you are grateful towards who helped get you to where you are?

I wouldn’t be who I am or where I am without my mom. I am so grateful for all that she’s done for me. She is my biggest supporter, and she knew that the path to my success would be for me to become an advocate. My mother is fierce . . . whether she is fighting the insurance company to cover my medications, driving me to yet another doctor’s appointment hundreds of miles away, testifying in front of the Michigan state senate for epilepsy protections for when I’m older and so much more. Epilepsy moms are no joke!

I also have to mention my friends from Links Connect in East Grand Rapids, especially Chris. Links brings general education kids into the special education setting. The reason I started the program in the first place is because a loving teacher saw my suffering and knew being a part of Links might help. It ended up giving me my purpose in life — to teach special education. My friend Chris has Downs syndrome, and he is the best person I will ever know. Chris gave me the gift of pure, unadulterated love when I needed it the most.

Can you share “5 things I wish people understood or knew about people with physical limitations” and why.

Can you please give us your favorite “Life Lesson Quote”?

There are two quotes I’d like to share. One is from my mom. She told me when I was first diagnosed that I had a choice that was completely up to me — whether I was going to be a victim or a survivor. I chose to not only survive, but to thrive. Life will throw horrible (and wonderful!) things at all of us — how you choose to react is 100% up to you.

I also like a quote from an author name Audre Lorde, “Nothing I accept about myself can be used against me to diminish me.” This is so powerful. Once you fully accept yourself and all the beauty and flaws that come with being human — whether that’s seizures, a stutter, a heart condition — no one can ever use it to make you feel less than.

We are very blessed that some of the biggest names in Business, VC funding, Sports, and Entertainment read this column. Is there a person in the world, or in the US whom you would love to have a private breakfast or lunch with, and why? He or she might just see this.

I would love to spend time with former U.S. Congressman Tony Coelho. The Honorable Mr. Coelho is the father of the Americans With Disabilities Act and is one of my personal heroes. He also has epilepsy. I’ve been lucky to have met him a few times here in Michigan and in Washington, D.C. He is a kind, brilliant and inspirational man and he paved the way for people like me and millions of others.

How Pfizer VP Caroline Roan and Pfizer are getting medicines, vaccines, and treatments into the hands of those who need them

Social Impact Heroes: Why & How Ger Duany Of Newday Impact Investing Is Helping To Change Our World

Social Impact Heroes Helping Our Planet: Why & How Hendrik Van Der Ham Is Helping To Change Our…

Matthew Petersen Of Jushi Holdings: 5 Things I Wish Someone Told Me Before I Became a Chef