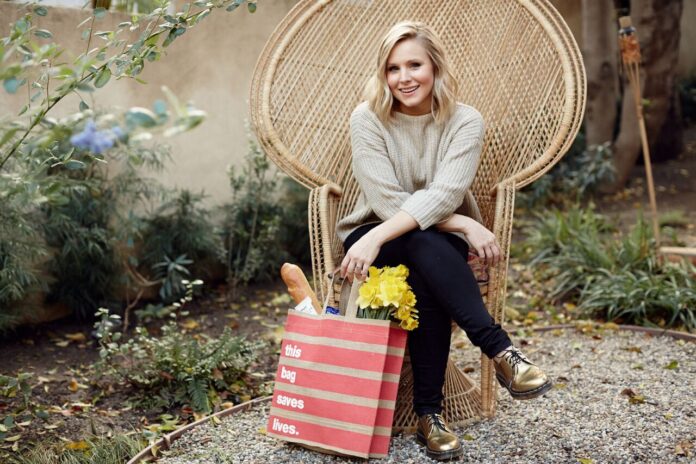 “My first big acting gig was a recurring role on Veronica Mars, where I played a serial rapist. A really really bad guy. That’s where I met Kristen Bell, and though we were on-screen enemies we became close friends in real life. Years later, when Todd and I got back from our trip to Liberia, I told her about the seed of an idea for This Bar Saves Lives. She was immediately and passionately behind it, came aboard in a founding role, and has been instrumental in helping to drive the brand forward. So I guess being a bad guy can lead to a lot of good!”

I had the pleasure to interview the founders of “This Bar Saves Lives”. This Bar Saves Lives is a social enterprise snack company. For each granola bar sold, they donate life-saving nutrition to a malnourished child around the world. Founders Kristen Bell, Ryan Devlin, Todd Grinnell and Ravi Patel launched This Bar Saves Lives to aid in the fight against malnutrition. To date, they’ve donated over 3 million nutrition packets to children in need.

Todd: Ryan and I teamed up to help a friend and her organization build a bridge and orphanage in Liberia. We raised funds through industry connections and visited the construction sites to check on the progress of the projects. Part of the trip included visits to refugee camps where the situation was dire for many. We both saw the heartbreaking effects of severe acute malnutrition firsthand. These kids, no different than kids here, needed proper nutrition in order to thrive and grow up to change the world around them. We decided then and there that we had to take action against malnutrition.

Ryan: We were introduced to an incredible product called Plumpy’Nut, which is a nutrient-rich paste, kind of like a supercharged peanut butter. It doesn’t need to be refrigerated, mixed with water, or cooked, which makes it ideal in times of environmental disaster or during refugee crisis. Two to three packets a day for approximately seven weeks can take a child from near death to certain survival. We were determined to get as many of those packets to children in need as we could. Rather than hit up the Hollywood community for more donations, we worked on a direct giveback model that, through the act of eating, would connect people here with those in need around the world. That’s how This Bar Saves Lives was born.

Can you share the funniest or most interesting story that occurred to you in the course of your career?

Todd: My first big gig was on a sitcom created by the producers of Will & Grace. I’d been a huge fan of that show and I remember watching it and saying to myself “That’s it. That’s what I want to do. And it has to be with those guys.” Eventually, I got to work with them and realize that dream. Years later, again, I was staring at my TV watching Anderson Cooper share the miracle of Plumpy’Nut on 60 minutes and I said to myself, “That’s it! That’s the answer to the malnutrition crisis! Why can’t we just get more of that to kids?!!” A few years later, we started This Bar Saves Lives and realized another dream. I’m very happy that I didn’t listen to everyone who said I watched too much TV.

Ryan: My first big acting gig was a recurring role on Veronica Mars, where I played a serial rapist. A really really bad guy. That’s where I met Kristen Bell, and though we were on-screen enemies we became close friends in real life. Years later, when Todd and I got back from our trip to Liberia, I told her about the seed of an idea for This Bar Saves Lives. She was immediately and passionately behind it, came aboard in a founding role, and has been instrumental in helping to drive the brand forward. So I guess being a bad guy can lead to a lot of good!

How have you used your success to bring goodness to the world? Are you working on any meaningful non-profit projects?

Todd: The purpose of This Bar Saves Lives is to spread love and bring goodness into the world. For each one of our delicious gourmet bars purchased, we provide life-saving nutrition to a child in need. The nutrition we give treats all levels of malnutrition from chronic to the most dire. So far, we’ve given over 3 million nutrition packets, which is enough to help save the lives of more than 20,000 children globally.

Can you tell me a story about a person who was impacted by your cause?

Ryan: Recently, our whole This Bar Saves Lives team traveled to Haiti to see the effects of malnutrition and witness the impact that our donations have had on the kids there. It was an incredible, life-changing experience for everyone. We met mothers with children who had once been malnourished — but thanks to our giving model, these children are now happy, healthy and strong. We have an amazing time-lapse that shows the miraculous impact this treatment has. A child comes back to life right before your eyes — it’s just so incredible. You can check it out here –

Keep the larger purpose of your project in your sights at all times. It’s easy to get bogged down in putting out the day to day fires, but if you remember that you’re doing something meaningful, any annoying tasks feel easy.

Divide and conquer. Early on, Ryan, Ravi and I divided duties at the company and got to pick the area of the business we thought we’d have the most fun taking on and go after it. That helped our individual and team work flow and motivation.

Communicate more than you think is necessary. It sounds dorky, but we always make sure to speak up if someone says something that bothers you, or say “Hey, great job today,” even if there wasn’t some huge win that day. The little things matter. Words matter.

Follow the fun. Fun is a great motivator. Make sure all projects big and small have some element of fun you can dig into. Even if it’s just singing along with Grateful Dead songs at the top of your lungs as you work on mind-numbingly boring spreadsheets.

Don’t be afraid to admit that you don’t know everything. We were actors starting a granola bar company to send food aid around the world. We had little to no idea about what we were doing when we started, so we asked A LOT of questions and had absolutely no ego about how clueless we were. That kept us open to everything as we accepted a lot of advice and help from so many amazing people.

Get the right people aboard early. Investors, advisors, employees, and consultants… whoever you bring aboard early is who makes up your foundation. And you need a solid foundation. Fortunately for us, we brought on a very strong foundation. We have a strict “No Asshole” policy, so everyone is on board for the right reasons. If you have passionate, smart, and driven people around you then they’ll make you look far smarter than you actually are 😉

Schedule time to be a little silly. Everyone works their butts off in the startup phase, and if you don’t consciously build in team field trips and happy hours then you’ll risk burning out or resenting the work. Starting a company, especially one that has a strong social impact component, is incredibly exciting and rewarding. Make sure you take the time to enjoy that.

Get a good bookkeeper. Totally boring tip, I know. But proper bookkeeping and financial modeling makes your life and business run smoothly. It took us years to realize this, and it only happened because we didn’t have any more room in our tiny office for all the random receipts we collected but never did anything with!

Is there a person in the world, or in the US whom you would love to have a private breakfast or lunch with, and why?

Barack Obama. I miss that guy. Pretty much everyone misses that guy right now I think.

Stars Who Make A Difference: Daphne Maxwell Reid of The Fresh Prince of Bel Air

How Pfizer VP Caroline Roan and Pfizer are getting medicines, vaccines, and treatments into the hands of those who need them

Social Impact Heroes: Why & How Ilknur Ozgur of Artstillery Is Helping To Change Our World

Disability Inclusion In The Workplace: Ninh Tran Of Snaprillia On How Businesses Make…