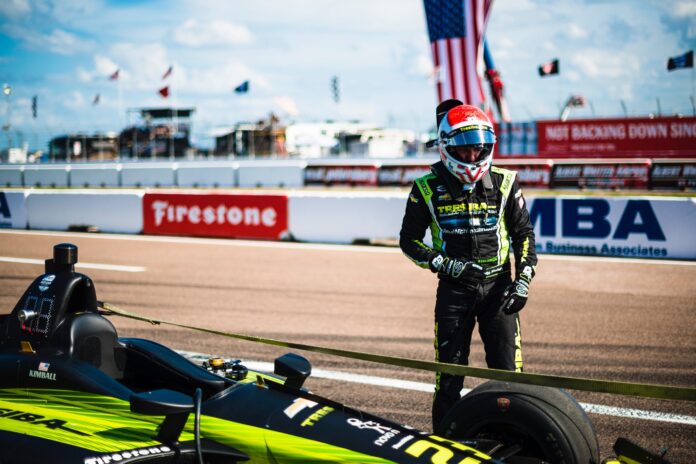 As part of my series about sports stars making a social impact, I had the pleasure to interview IndyCar racer Charlie Kimball. Charlie was diagnosed with type 1 diabetes at age 22, is the first licensed driver with diabetes in IndyCar and was the first licensed driver with diabetes to win an IndyCar race. He doesn’t let his diabetes prevent him from making history. Charlie partners with Novo Nordisk on Race With Insulin®, an educational program that aims to raise awareness and educate the public about the importance of diabetes management. Charlie meets with thousands of people with diabetes each year to share his story and inspire them to not let their disease get in the way of pursuing their dreams. Charlie received the Jefferson Award for Public Service for his work in the diabetes community.

Thank you so much for doing this with us! Can you tell us a story about what brought you to this specific career path?

As the son of a motorsports engineer, I grew up watching racing, was captivated by it on TV and fell in love with it when I got behind the wheel. I started racing go karts at age 9 as a way to spend some time with my Dad on the weekends, and received a ride in a Formula Ford for my 16th birthday and have never looked back since.

Can you share the most interesting story that happened to you since you began racing?

Some of my favorite, and life-changing memories — come from meeting people who I have met through diabetes. I have developed a long friendship with Billie Jean King that originated through a diabetes connection and we stay in touch mostly through texts. It has been a wonderful journey to meet people who have changed the landscape of society through sports and so often diabetes is what connects us.

The race team did a great job on my very first IndyCar Pit stop in St. Petersburg in 2011, but I made a rookie mistake that I will always remember. I underestimated the effect of cold tires coming out of pit lane on that very first stop and ended up brushing the wall and was quickly out of the race. That day, racing legend and teammate Dario Franchitti told me he had made the same mistake and there was always plenty to learn and I should never stop learning.

Can you describe how you are making a significant social impact?

It’s been very rewarding for me to be part of Novo Nordisk’s Race with Insulin program. Being in the public eye provides me the opportunity to tell — and show — that you can successfully manage your diabetes and live a full and rewarding life. And it’s not just about my story. For me it is also so important to connect with those living with diabetes one relationship at a time so that each person has a chance to share their story with me. Each one of us has a story to tell and those stories are important. Diabetes chose us and I have always felt we are the “Cool Kids Club” and it’s a pretty cool club to be part of.

Can you tell me a story about a particular individual who impacted you in this cause?

My endocrinologist, Dr Anne Peters has educated and empowered me through her experience. Since very early in my diabetes journey, she has been integral to my health care management and she encourages me to share my story with others. She has shown me the importance of telling my story and the value in hearing the story of others.

Leadership means leading by example — defining your actions and living your life in a way that others will want to follow. It is important to me to be a leader on the racetrack, in the diabetes community and at home, being the best husband and father I can be.

My parents taught me “If you love what you do you, will never work a day in your life.” There are lots of ways to earn a living, but there are fewer ways to be happy. Happiness equals success in business and in life.

Is there a person in the world, or in the US whom you would love to have a private breakfast or lunch with, and why? He or she might just see this, especially if we tag them.

There are a lot of people who fit in this grouping, and most of them are agents of change. My list would include President Obama, Mark Cuban, Condoleezza Rice and Madeline Albright

Stars Making a Social Impact: How Casting Director Carmen Aiello is making sure that casts reflect the diversity in our culture

Anheuser-Busch VP Adam Warrington: “There is something everyone can do to support and encourage our first responders”

Social Impact Heroes: How Jeremy Bloom of ‘Wish of a Lifetime’...